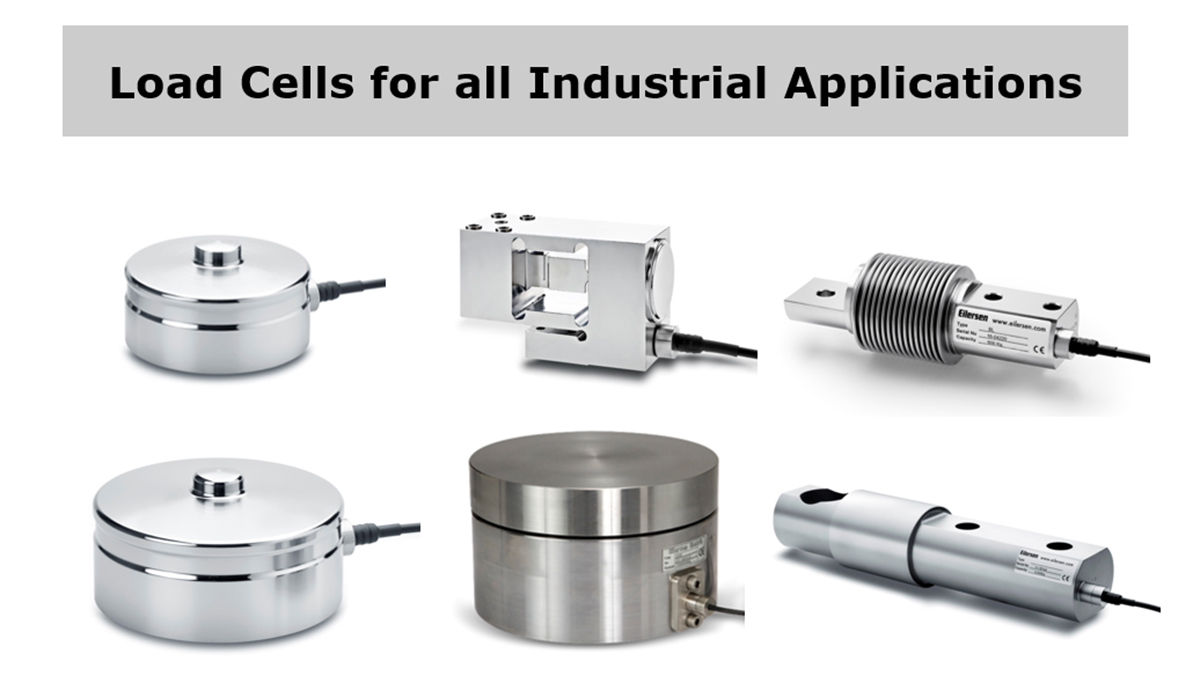 1958 The first experiences with weighing

In 1958, a young Nils Eilersen was approached by his father to build an electronic scale for the family furniture business (www.eilersen.eu) in order to measure if the wood was dry enough to be used for furniture production. This project later turned out to be the basis for the foundation of the company Eilersen Electric A/S. After many hours of work, Mr. Eilersen had a working scale based on strain gage load cells but Mr. Eilersen did not find the strain gage technology accurate enough and too sensitive to overloads and shocks.

During his studies at the Technical University of Denmark, Mr. Eilersen was dedicated to looking for more robust and more accurate measuring principles. It was during his time at the university that he did his master theses on measuring capacitances.

After his studies, Mr. Eilersen was appointed development manager in a company developing industrial test equipment and he soon realized that the capacitive technology had a great potential in this business area. One of the company’s biggest sellers was an imported mechanical instrument for testing the pump pressure in diesel engines.

This led to the foundation of Eilersen Electric A/S in 1969 and as a result of hard dedicated work, Nils Eilersen was granted a patent in 1971 on measuring capacitances which was the measuring principle used in his electronic test equipment for diesel engines. The so-called “Diesel Tester” was used for measuring the pressure in the injection pumps in Diesel engines.

This product was a very big success and led to Robert Bosch GmbH buying an exclusive license to manufacture and sell the electronic diesel tester in 1972.

The many advantages of the capacitive technology were clear, so Mr. Eilersen decided to develop a load cell based on the capacitive measurement principle.

As a result this development work, Eilersen supplied the first load cell to a local pharmaceutical company in 1976. This was one of the first installations using stainless steel load cells for process weighing.

The Eilersen load cells were based on a patented simple and efficient capacitive measuring circuit, followed by a patent on the mechanical design of the non-contacting capacitive sensor.

During the 1980’s then the company was growing steadily and many different types of analog capacitive load cells were developed and supplied to a growing customer base worldwide.

In the beginning of the 1990’s, it was clear that the future lay in digital technologies.

Looking to secure continued growth for the future of the business, the decision was made to develop a digital load cell based on the capacitive measurement principle. A sister company, founded in 1986 and based in Switzerland, Eilersen Electric SA, was given the responsibility for developing an ASIC based on a number of new patents on the capacitive technology.

This digital technology has set a new standard in the weighing industry and many thousand Eilersen digital load cells have since been installed in industrial applications at leading companies in more than 85 countries worldwide.

Today, many of the first installations supplied by Eilersen are still in use even though they are more than 30 years old. Eilersen is committed to supplying the same high quality weighing solutions for many years to come.

You can find Eilersen customers all around the world and they are among the leading companies in several different industries. Our dedication to technology, quality, and service has resulted in a very high level of customer loyalty and satisfaction.

2013 Installations in more than 85 countries worldwide

If you would like a quote or information on the Eilersen digital load cells and robust weighing solutions, please send a request using our contact form 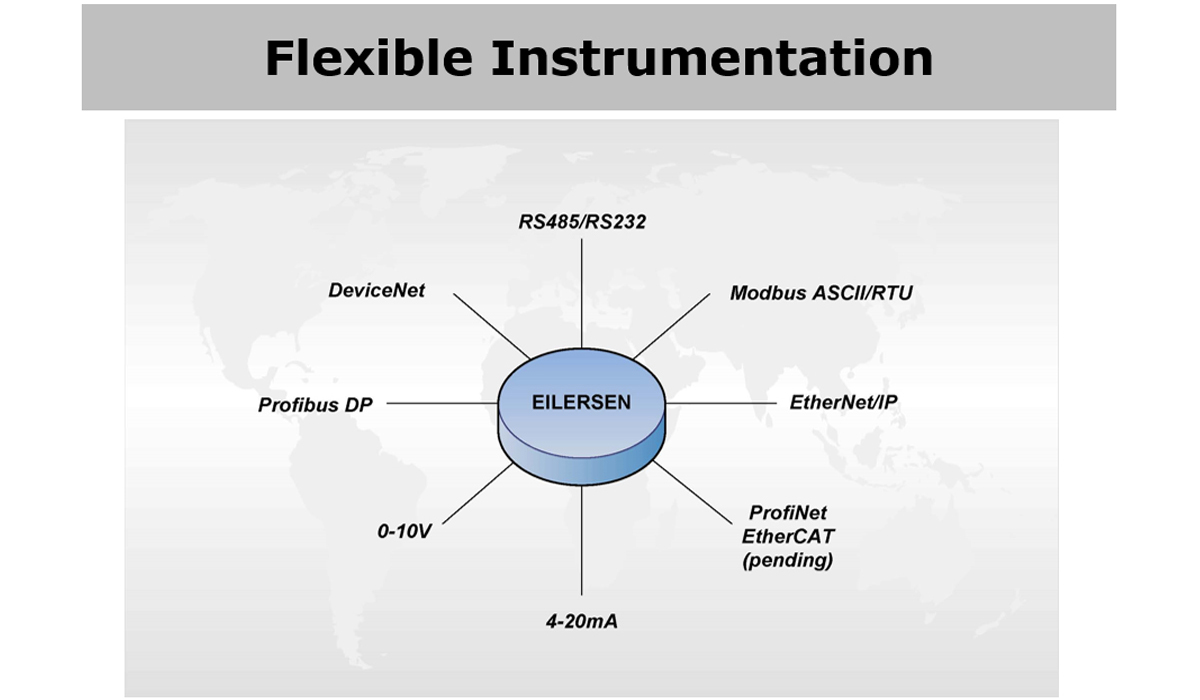 This robust technology allows for a very simple and hygienic mechanical installation of the Eilersen load cells without expensive and complicated mounting kits, stay rods or overload protection devices. The simple installation eliminates the need for maintenance and reduces the total cost of ownership.

The electrical installation of the Eilersen digital load cells is pure plug-and-play as the output from the non-contacting sensor is directly converted, compensated and calibrated to RS485 signal by a proprietary ASIC in the load cell.

This RS485 signal contains the measuring data and status codes for diagnostics, which is transmitted through the single wire coaxial cable to the weighing instrumentation.

This patented digital technology eliminates drift and inaccuracy found in analog circuits as the complete measurement chain is digital.

Every Eilersen load cell is individually factory calibrated and compensated to ensure the highest accuracy (up to OIML C6 MI10) and quality on the market.

The pre-calibration of the Eilersen load cells and the possibility to monitor the load and status of each individual digital load cell, provides visibility, easy troubleshooting and saves time during commissioning.

Furthermore, the load cell cables can be mounted onto the load cells on-site, if convenient, and the cable length (up to 100 meters) has no influence on the calibration of the Eilersen load cells.

The capacitive technology and mechanical design of the Eilersen load cells is patented and trusted by customers in more than 85 countries worldwide.

Capacitive and strain gage load cells both relies on an elastic element which is deformed by the load to be measured.

The material used for the elastic element is normally aluminum for low cost load cells and stainless steel for load cells used in corrosive industrial applications.

A capacitive respectively a strain gage sensor measures the deformation of the elastic element and the output of the sensor is converted by an electronic circuit to a signal which represents the load.

Furthermore a capacitive sensor is very sensitive with a change of capacitance of 10% while the foil strain gage normally only has a change of resistance of 0.1%.

The low strained element combined with the fact that a capacitive sensor is non-contacting, provides the very high shock resistance and overload capability of the capacitive load cell compared to the strain gage load cell.

The high change of capacitance lends itself to provide a digital output signal which in the Eilersen capacitive load cells is a high speed signal, representing the load directly in g, kg or Newton.

A low cost coaxial cable with a one wire hermetically sealed connector supplies the load cell with power and transmits the high speed digital signal back to the instrumentation which may be placed several hundred meter away.

In a standard analog strain gage load cell, the power supply and the low level analog signal are normally conducted through a rather expensive 6 wire cable to the instrumentation where the analog signal is converted to a digital signal.

In a digital strain gage load cell, an amplifier and also the A/D conversion are placed in the housing and the power supply and the digital signals are normally conducted through a rather expensive 6 or 7 wire cable to the instrumentation.
With the 6 or 7 wire cables used in strain gage load cells it is difficult to obtain the necessary IP68 protection for industrial environments without complicated water traps or expensive multi pole hermetic feed through connections.

In contrast to this, is the uncomplicated IP69K single pole connector used in the Eilersen capacitive load cells which furthermore has the logistically important advantage that the cable may be mounted just before delivery with length and PVC/Teflon type according to customer specifications.

With reference to the above-mentioned merits of the Eilersen capacitive and the strain gage load cells the following can be concluded:

This is an obvious advantage in industrial environments and especially for the lower capacity load cells where the risk of damage because of shocks and overloads is high.

These features means that expensive mounting kits with side load- and overload stops – which often cost as much as the load cell itself and needs maintenance – are normally not needed with the Eilersen capacitive load cells which as a consequence offers a simple and inexpensive mechanical mounting in the application.

The factory calibrated, digital high speed signal, conducted through the well shielded coaxial cable, provide simple plug and play installation and at the same time the EMC protection and the protection against welding voltages needed in industrial applications.

The high speed signal, sent at 230 kBaud, with the load value in 24 bits and with address and diagnostic codes, is necessary for the 1000+ readings/second in dynamic weighing applications and for the very short update time of 2 mS necessary for four loads cells in platform and cargo weighing, mixing, dosing and hopper applications. 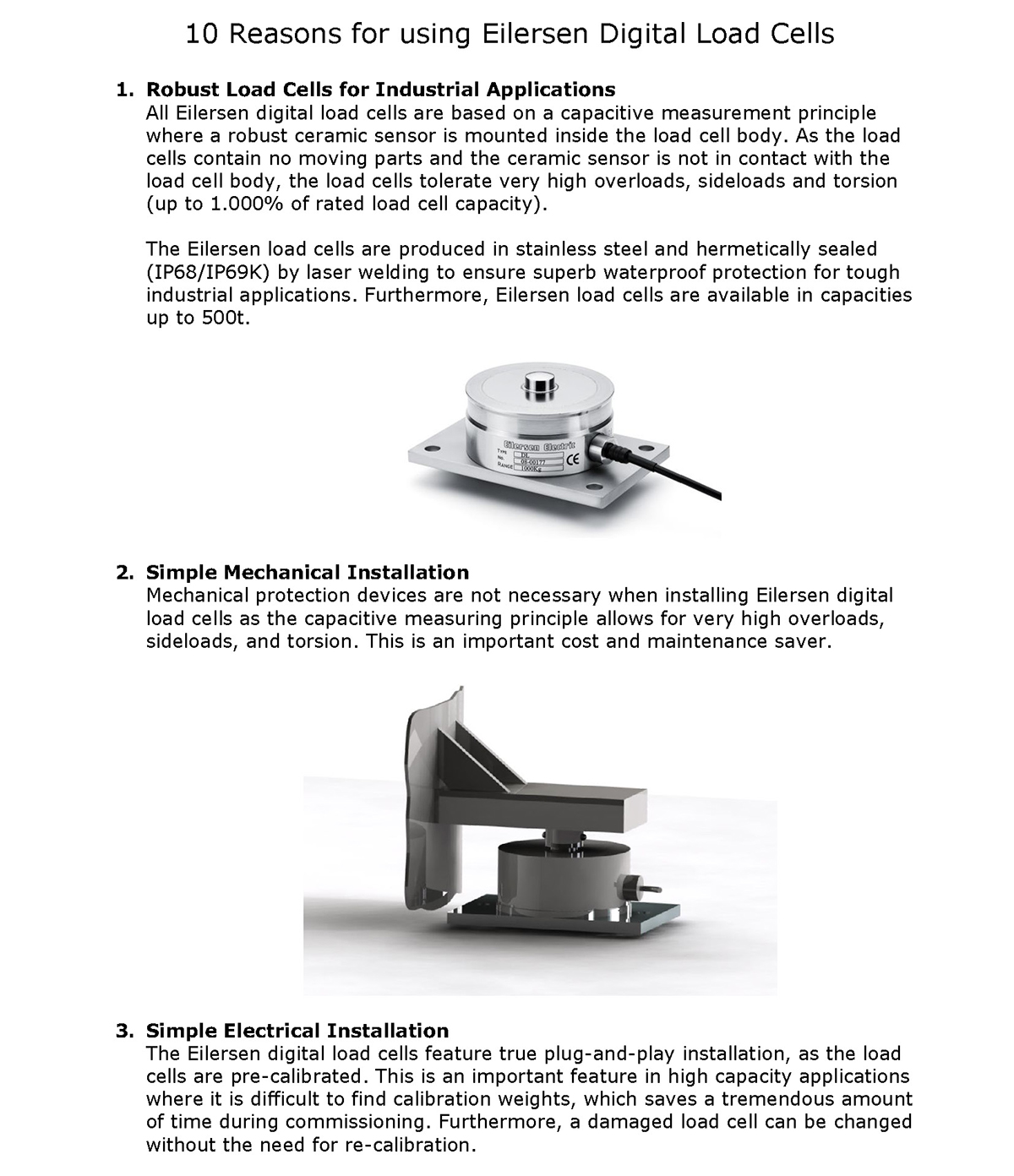 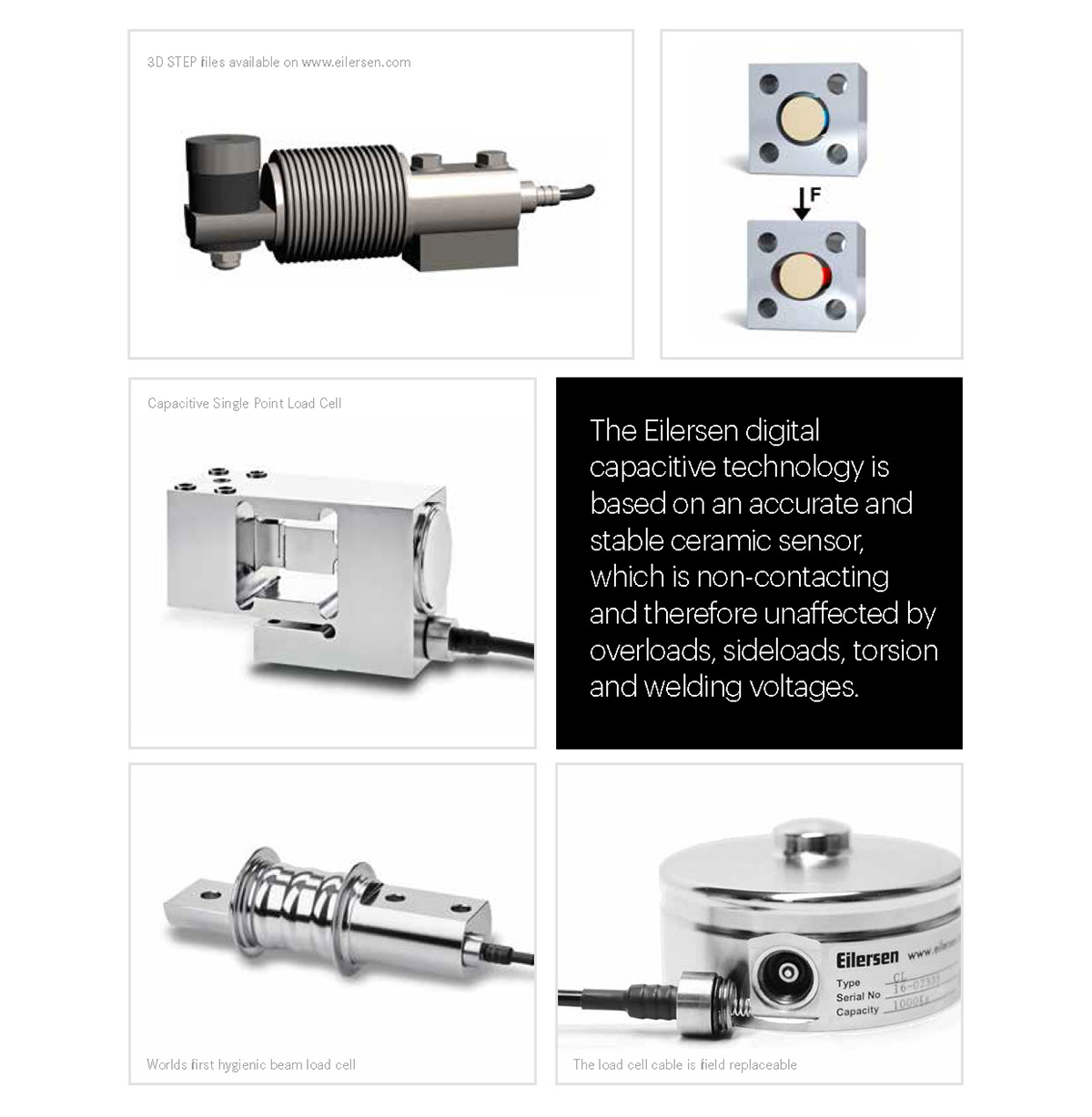 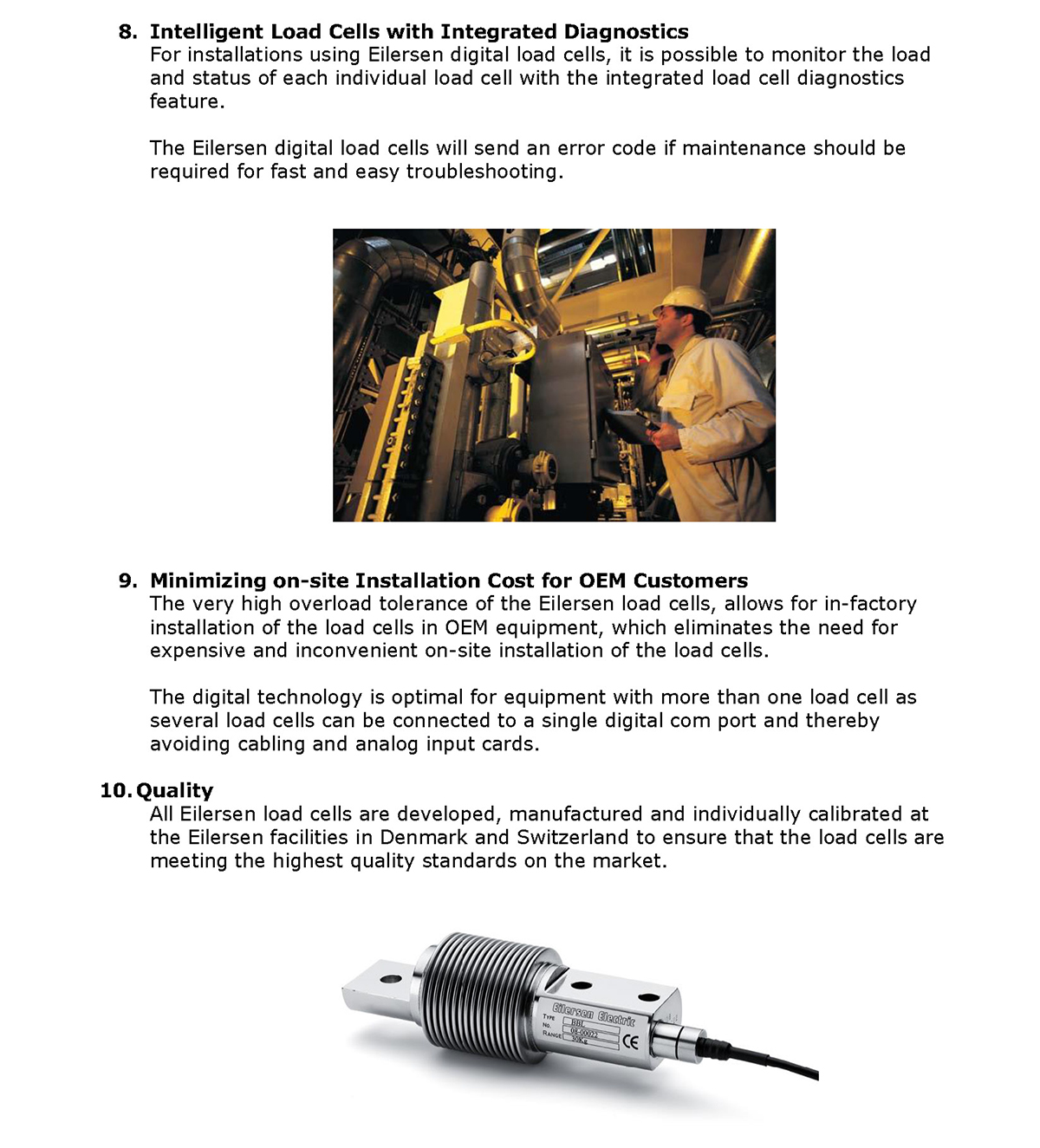 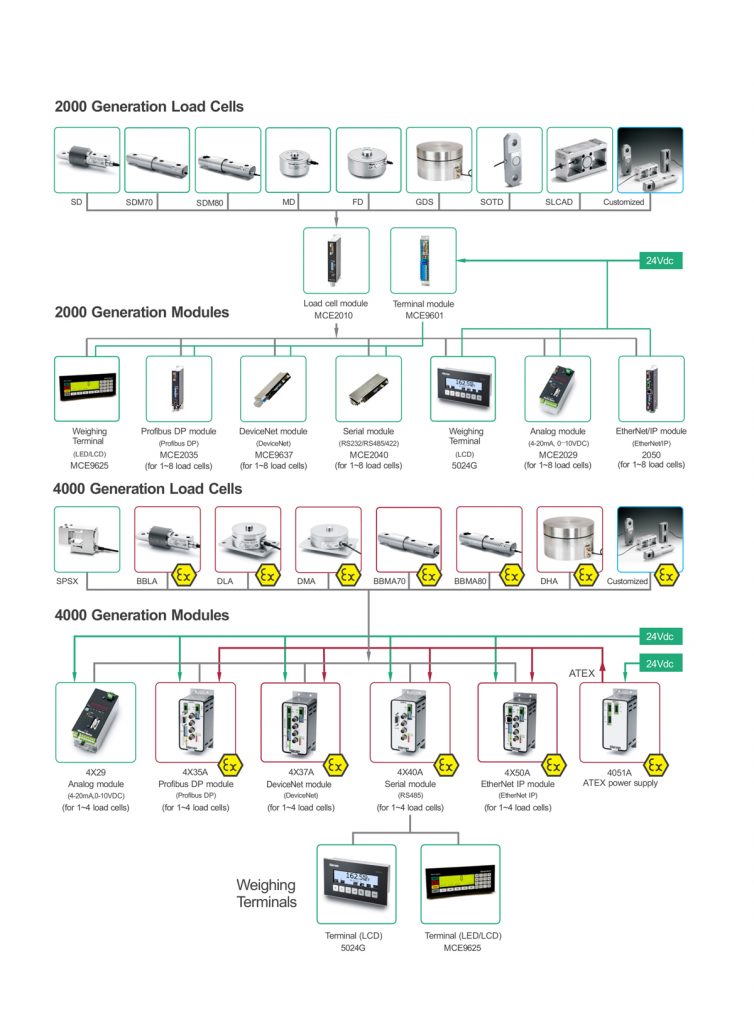